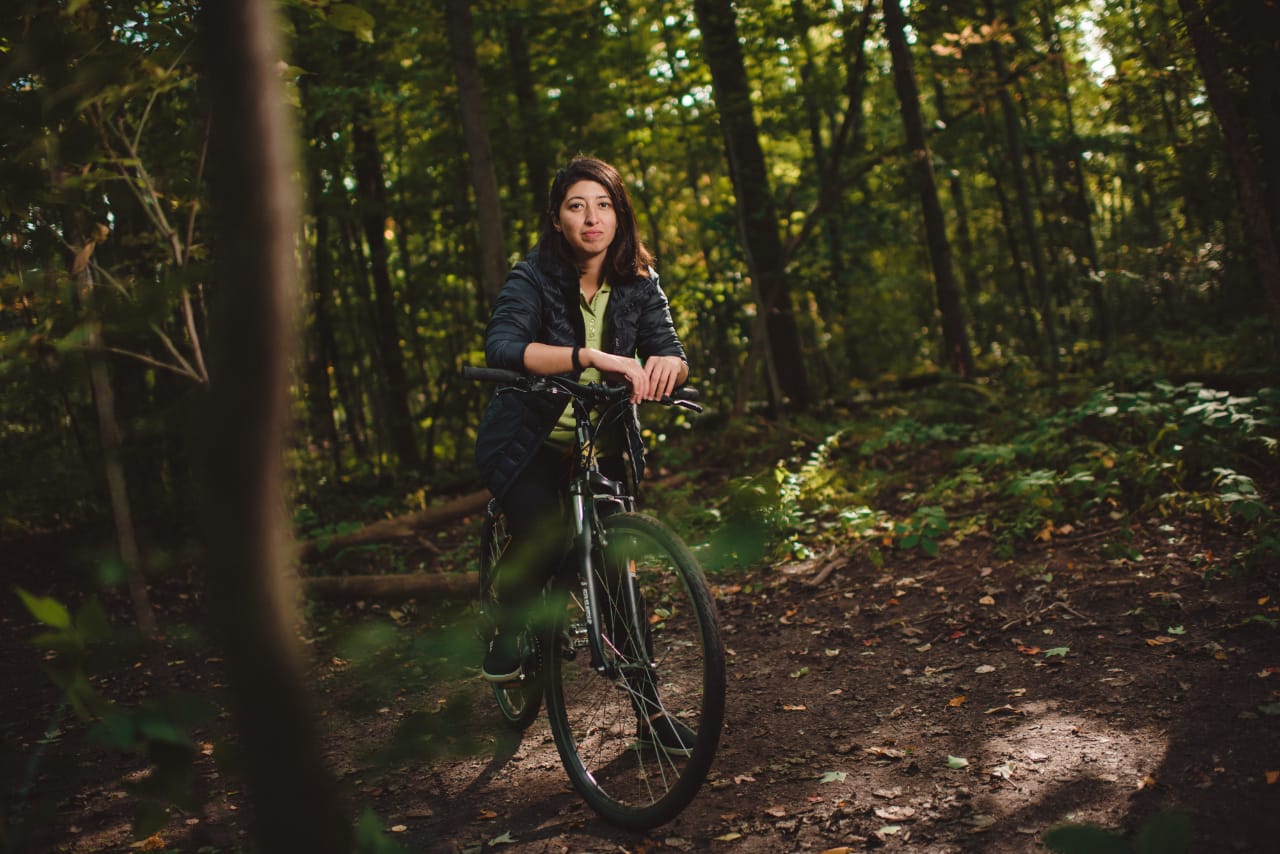 Samar Khan became the first women in the world to ride the cycle on 4,500 meters Biafo Glacier in the Karakoram Mountains of Gilgit Baltistan.

Samar Khan belongs to Khas Dir, Khyber Pakhtunkhwa. She holds a Master’s degree in Physics. She discovered her love for sports in Army School of Physical Training, Kakul, from where she learned Para-gliding. Later on, excelled in other fields as well as trekking, mountain biking & martial arts. Cycling was chosen to be the best way of exploring world & to discover the unseen beauties of nature.

Rohail Amjad:  What motivated you to travel to the roof of Africa and glaciers BIAFO  on cycle?

Samar Khan: When I explored mountains for the very first time and when I started sports, it was the only mountain ranges the thrill and adventure I felt while doing sports. That also pushed me to try more different things. I wanted to challenge my limits, discover my strengths, and introduce these sports in Pakistan, as we don’t have any athlete or foundation for action sports whom we could look up to at that time. The only inspiration for me was the European athletes, that’s why I started attempting adventure sports, challenging rides, and challenging landmarks. The main objective to travel to BIAFO glaciers was to highlight the tourist importance of that area and when I traveled, that was covered by most of the press globally.

Rohail Amjad:  How many medals you have won for Pakistan?

Samar Khan: As there is no Mountain Biking Team in Pakistan, I couldn’t compete in a Championship but I have set records in action sports. I was the first woman cyclist to visit BIAFO glacier and the roof of Africa. I was trained and mentored under the “Global Sports mentoring program” by ESPNW US. I am also the ambassador of WWF as my sports are quite aligned by the objective of WWF.

Rohail Amjad:  You’re from KP and People mostly consider Pashtuns to be conservative and then we have Samar Khan – the cyclist, how come this be?

Samark Khan: Yes, the Pashtun are considered very conservative, especially from the belt I belong from Lower /Upper Dir. That entire belt has very strict norms and rules towards females, they keep them in homes and don’t allow them to work in public among men. Females, there don’t have many career options, very few of them get a chance to pursue higher education, things are changing now but at a very slow pace.  When I started sports, I had a huge responsibility not only to represent Pakistan but also to represent the Pashtun community, nationally and internationally because the tag of extremism, ignorance, violence is often attached to us. I tried my best to grow myself not only as an athlete but also as a leader so that wherever I speak, I represent very modern, broad-minded, and sporty Pashtuns and the legacy I want to leave behind the Pashtun community. This is especially for the girls so that they know about their rights and they get their freedom to pursue their education, career, or to bring honor home, they should have the courage to speak it out.

Rohail Amjad:  Do you think we should have more female cyclists on the road and is our society ready to accept it?

Samar Khan: I believe the activity should be done more to make society accept these sports. There are two kinds of people on the road, one who want to harass us and the other who stare us only because this something new that is being done.

No doubt, it was very challenging to choose a field that is associated with men. When I started doing sports, the barriers I had to face were the social norms, cultural restrictions, values which hindered my sport’s path. Many of my family members wanted me to stay at home. They criticized my sports kit, working with men as they considered the sports field only being limited to men.  Riding on the road is normally very different in Pakistan, even if you’re from a Pashtun family or not. I get a lot of stares and catcalling when I commute on my bike in Rawalpindi/Islamabad though I also get a lot of thumbs up from educated people who understand and appreciate the sports.

Rohail Amjad:  You have represented Pakistan on many international stages, do you think those countries are ready to invest in Pakistan for the sporting industry?

Samar Khan: Luckily, I have traveled a lot. I have visited the US, Russia, and East Africa, and have represented Pakistan in a very positive way and in a modern way.  Most of them didn’t know anything about Pakistan except what the media tells them about us. I was lucky enough to enlighten them about our cultural diversity, seasonal diversity, music, food, and other things. So after that most of the people belonging to the media, tourism industry, vloggers showed interest in Pakistan, and once the season opens I expected most of them to visit Pakistan.

Rohail Amjad:   What differentiates “Samar Camp” from other sports camps?

Samar Khan: There are a lot of private sports clubs now, working on a commercial level. The difference between “Samar Camp” and other camps is that it is the only camp that has launched and promotes sports like cycling, mountaineering, and other adventure expedition. These sports were never promoted before, in Pakistan. This our second year and we have launched snowboarding, which is very new and cool sports at the same time. There was not a single snowboarder before to look up to and we lacked sports equipment too. This camp has three members including myself, with the help of our few friends we have arranged equipment, conducted a few mountain biking camps and training, which is very new in the country. Training women in cycling, mountain biking, taking them to the adventurous landmark mountains and make them challenge their limits and their strength. This only doesn’t make them physically strong, it also makes them mentally strong.

Samar Camp’s objective is not only to empower youth but also to build an economy from adventure sports which will help the coaches to sustain and extract talent from the local community.

Rohail Amjad: How has been the government support for cycling and adventure sports?

Samar Khan: The association and federation of cycling are working in a very slow and conventional pace. They are improving over time but only for conventional sports, improvement is yet to be witnessed for adventure sports. In the Private sector, there are few athletes, mountaineers, and adventurist which are making effort but all in their own personal capacity. All the sports depends upon potential sponsors but I think private, media and corporate sector should also be promoting sports other than Cricket. What this does is, under shadow the athlete, and their efforts aren’t highlighted. If the private sector takes those on board and brings those unsung heroes in the limelight, a difference can be made.

Samar Khan: Corporate sponsorship is quite tricky.  Most of them prefer sponsoring the organization rather than the athlete. But when it comes to sponsoring an athlete, the approach is quite materialistic. If a female athlete is modern and glamorous, corporates won’t have any issues sponsoring her but if the athlete’s appearance isn’t that attractive and devoted only to the sports, she may have issues acquitting corporate sponsorships.

Rohail Amjad:   I saw one of your pictures, sitting on the dangerous Hussaini bridge, weren’t you afraid of doing that?

Samar Khan: I always wanted to cross it and when I get an opportunity I enjoyed it. Initially, you get a dizzy feeling if you keep watching the rivers but there is a trick that keeps your head up and sees the next end instead of focusing on the water. It was an awesome experience, I always used to see the videos of people crossing the river. It’s a man-made very dangerous bridge with one plank being away from another with the trashing river flowing underneath

Rohail Amjad:   What do you see the future of adventure sports in Pakistan?

Samar Khan: We have been blessed with the biggest mountain ranges, glaciers, high altitude lakes, rocky mountains, dense forests, and beaches, all of which make the future of adventure sports quite bright in the years to come.

Rohail Amjad:   Your message to the parents who stop their children from doing such sports especially females?

Samar Khan: Sports is something very healthy and positive for any individual and parents have millions of examples of athletes that bring honor to their nation. If your child wants to do the same you must allow them as they will be representing your country and might shine like a star.  I believe they should allow their children to discuss if they want to pursue in any of adventure sports instead of simply rejecting their ideas

Samar Khan: Thank you so much, pleasure talking to you as well. Allah Hafiz