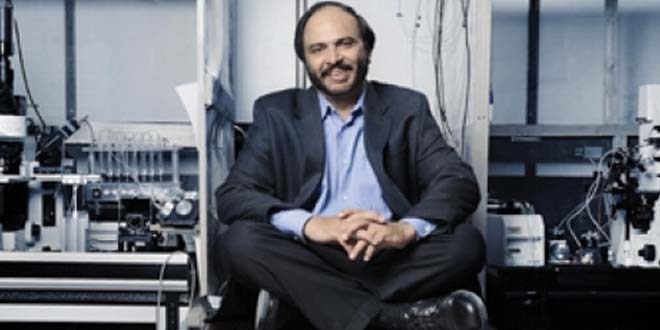 Dr. Naweed Syed is a Pakistani Canadian scientist. He is the first scientist to connect brain cells to a silicon chip. Dr. Syed has traveled worldwide giving lectures and presenting presentations about the human mind and his mini-chip.

Dr. Naveed Syed, working in the University of Calgary’s Hotchkiss Brain Institute has created the neurochip. He has made a way possible for us to know the communication between a tissue and an electronic device.

Umar Malik: Please tell us about the Semi-Conductor chip?

Dr. Naweed Syed: If you study the brain mechanism, you need to develop such technology which will enable us to read the chemical reactions within the brain. One of the challenges we have is that we have no tool to understand the brain function, secondly, if the brain gets damaged, the natural tissues doesn’t get replaced and human being loses the permanent functionality of that system. Our motivation was to develop such an item which could not only understand the brain’s chemical reaction but also be replaced by electronics.

For the semiconductor chip developed, it was necessary for it to have a direct conduit with the brain cells. The bain cells consider that chip a part of the brain and become compatible with it. A person’s brain can light up the lamp, it has so much energy in it. There are many disease which can be cure via chip. For say if people lose sight, these chip can be used as a replacement of retina.

We have developed a series of brains chips which we will be launching soon. The artificial intelligence can be used for robots to feel and love like humans.

Umar Malik: How long did it take to develop?

Dr. Naweed Syed: We first launched in 2004, we firstly started from animals, we started from snail as their brain cells are more. That also enabled us to realize that it is a proof of concept and in can be done. Then we experimented on mice and monkeys now finally on human brains.

In order to realize the dreams, I request the younger generation to wake up, they have to  take risks.

Umar Malik: Do you think that technological advancement could increase the life span of human being in future?

Dr. Naweed Syed: Science is way behind religion. Hazrat Nuh(PBUH) was 900 years old, Hazrat Khizer is still alive. To conquer live is not the only purpose. Hazrat Esa(PBUH) was born without a father, science has progressed so much that it can breed a child without a father, so it’s not a big deal. All of this human and animal cloning is basedon this purpose. In Alaska, frogs are frozen for 8 months amidst extreme weather but when its spring they are again fine. Those frogs have proteins which dont allow water molecules to crystallize. Science is not a wonder. The miracles were previously done by Prophet but now it has to be done by humans. We can now easily diagnose that whether the early stage pregnant mother will be giving birth to a child with a genetic disorder or not. We also have a crysper technology which can replace those defected genes with a healthy one. Its not how long you live, it actually how you live. There is no point in having a longer life having many diseases. This will also create a burden on the health care system

Umar Malik: How far are we from cancer?
Dr. Naweed Syed: A very good question, if you look back you won’t find cancer more than 500 years old. Japenese have the lowest cancer rate, their calorie intake is 2600 per day. In Pakistan, our calorie intake is about 3500 to 3700 per day and in North America, we have the highest incidence of cancer. If these issues are curbed earlier than these diseases can be avoided. The high-calorie intake damages the oxidative and damages the DNA. and the DNA in reaction to that becomes a tumor. The normal stem cells are constantly repairing your system

Umar Malik: Health care system in Pakistan is poor, what can people and government do to improve?

Dr. Naweed Syed: Dietary habits need to improve. People need to improve their eating habits. Most of the people eat late at night and then go to bed. The heart keeps on digesting instead of having rest. In Holland, i have seen people at the age of 70 and not having antibiotics. The government must awareness campaign. The salts and the spices which are used as daily commodities are highly dangerous for the health system. Unfortunately, whenever people go to Hajj, there is only on vaccine i.e Polio. The government needs to educate people in their own regional language.

Umar Malik: Your message to the youth?

Dr.Naweed Syed: Firstly, identify your destination secondly, know you are on the right path. The basic purpose of the Muslims is to serve Humanity. The job should not be an objective to make money but to serve humanity